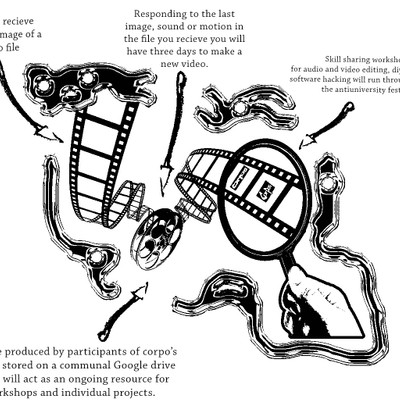 MASS SCREENING OF A COLLABORATIVELY MADE FILM on sunday the 13th of june we are proposing for as many people as possible to set up guerilla screens in public spaces (sheets, projectors, hacked billboards!) to screen the films made by the CORPO.S exquisite corpse film project throughout AntiUniversity Festival 2020 (see below for details).

Tune in via zoom if not in the streets

A collaboration and series of skill-sharing workshops. CORPO.S (Casually organised reality precarious on screens) is a name we’ve given to a project we’re proposing for antiuniversity festival 2020, which first and foremost is an impetus for a collaboratively produced series of films, made through following a bastardised form of the surrealist parlour game most people know as Exquisite Corpse (also known sometimes as Consequences)

The exquisite corpse game in its parlour-based form involves passing a piece of paper from one person to another and drawing a part of a body: participant 1 draws a head; they fold the page back so that only the very base of the neck is visible; they pass the folded page to participant 2; participant 2 draws on, joining to the neck some shoulders, maybe a chest; they fold the page back and pass it on, et cetera. This can last however long and eventually the page is unfolded to reveal a strangely formed body.

We’re proposing to borrow the base logic of this parlour-thing and make it into some kind of a public-thing by doing it mostly over zoom and google drives and whatsapp chats in lockdown, given that that’s where, for almost all of us, almost everything beyond us happens. And instead of a drawing, we want to make a film,

so that on June 13th, we can screen it in as many places and in as many ways as possible – projected at night onto a building, hooked up to a billboard, projected out of a bedroom window onto a sheet at the bottom of a residential street (however, whatever people can think of and/or pull off).

You don’t need to know anything about making films to be involved! As part of the CORPO.S thing, 3 slots have been booked up during the festival (June 8th, 9th, and 11th) for skill-sharing workshops facilitated by participants in the project. These will include introductory workshops around using open sourced video and audio software, animation, stop-motion, and making DIY camera rigs, among other things (more to come!). These are open to all and notes from them will be uploaded to a public folder for future access.

Participants are encouraged to get involved with these workshops and play around with new ways or working and making things, but you are equally welcome to submit a 40 second video from your phone archives of something non-descript – the only stipulations for submission to the project are as follows: Contributions eventually need to be made into an mp4 file (you can send us a different format but we will have to do some adjusting to make it fit!) Contributions need to be between 30 seconds and 3 minutes Each contribution will be understood as a continuation from the one preceding it (with, however, a pretty broad and expansive understanding of what might be meant by ‘continuation’)

Participants are invited to join ongoing group discussions ahead of the festival from May 22nd onwards to propose activities, ideas, and potential collaborations. Follow our instagram page (@exquisitecorpo.s) or like our facebook page or email us exquisitecorpos@gmail.com to get involved ahead of June 6th!

See the diagram below for a breakdown of the process of getting involved, and for more info and the opportunity to ask questions and raise new ideas, join us for a big zoom to get things rolling and to meet each other(‘s faces on screens)at 6pm on June 6th!