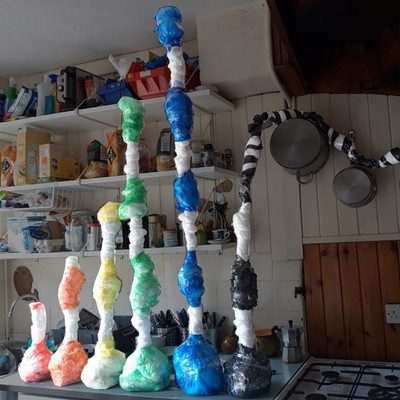 Artist Julika Gittner’s stall at the anarchist bookfair shows objects and videos that expose the main manipulation and disinformation techniques commonly used by local authorities and their hired consultants to influence residents’ opinions in estate regeneration schemes. Based on my findings from the ongoing consultation process at the St Raphael’s estate in Brent, London NW10, the sculptural diagrams illustrate key facts and figures that directly challenge the council’s unscrupulous push for the demolition of the estate. The pieces question the aesthetics of common factual persuasion methods and propose an alternative visual language for the propagation of counter-knowledge through activist art.

The works presented at the fair are part of the art and research project Manufacturing Discontent that uses sculptural visualisations to render the physical and spatial implications of abstract data tangible and accessible to non-experts. Data-based visual representations of social, economic and political realities are widely used by political establishments to manipulate peoples’ consent to profit driven decisions in urban regeneration projects under the guise of statistical objectivity. The need to challenge dis-information and misrepresentation through visual advocacy is recognised by resistance movements such as Architects for Social Housing (ASH) who supply campaign groups with ‘counterpropaganda’ (Elmer and Dening, 2016) to challenge local governments data-based rationale for social housing estate demolitions in London. However, the complexity and abstraction of the contested information makes it largely inaccessible to non-experts and hard to refute via conventional textual and graphic forms of campaign media. This project devises ways to use objects to expand the visual pallet of protest in order to contest the ‘truths’ propagated by the regeneration machine.

Julika Gittner practices and teaches across the disciplines of art and architecture. Her sculpture, performance, sound and video works have been shown internationally and explore the social and political role of art and architecture. In 2019 Julika was awarded the AHRC SWW DTP2 PhD studentship to undertake an interdisciplinary practice-based PhD in Fine Art and Architecture at the Universities of Reading and Cardiff that looks at devising a sculptural practice that enables the communication of counter evidence in today’s contested politics of space.