Democracy is in crisis. Across the widest possible political spectrum - from the Brexit Party to XR, Washington to Rojava - people use it to describe their ideology, while bigots everywhere invoke it to justify oppression, inequality and violence.
It is clear that democracy - the principle of government by and for the people - is not living up to its promise. In fact, it seems like real democracy, may never truly existed.

But what does the term even mean?
Is democracy a means or an end? A process or a set of desired outcomes? If democracy means rule by the people, what counts as rule and who count as the people? Democracy’s inherent paradoxes are too often unnamed and unrecognised, but it is no longer possible to ignore them.

This Antiuni session will explore the different meanings of the term Democracy with author and filmmaker Astra Taylor. We will look at how the term has been used (and misused) by different people in different times, its challenges and limitations, the atrocities enacted in its name and the potential for ever achieving ‘true’ democracy, inclusive and egalitarian, free and just.

Astra Taylor is the author of The People’s Platform (winner of the American Book Award) and made two documentary films, Zizek! and Examined Life. Her writing appeared in the Guardian, New York Times, the Washington Post, n+1, and The Baffler, where she is a contributing editor. She lives in New York City.
Her latest book ‘Democracy May Not Exist, but We’ll Miss It When It’s Gone’ offers a comprehensive, challenging and original reflection on all these questions, covering Ancient Greece and Occupy Wall Street, the Founding Fathers and Greta Thunberg, Karl Marx and pirates.

Taylor has been described as ‘a rare public intellectual, utterly committed to asking humanity’s most profound questions yet entirely devoid of pretensions’ (Naomi Klein). 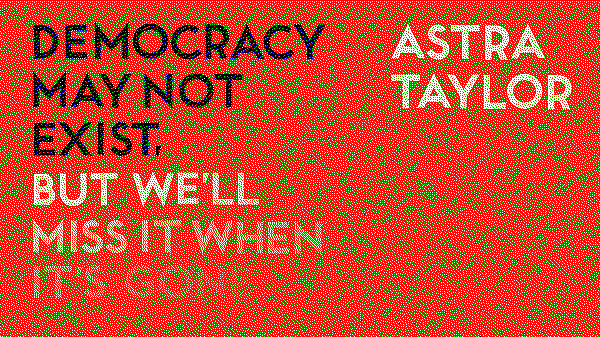